S2020B Staff have been involved in a recent rapid response Unarmed Civilian Accompaniment project with volunteers based in the US who broke the siege and abuse of a key human rights defender, Sultana Khaya, and her family members, who had been tortured, attacked, and kept under house siege for 480 days before the volunteers arrived to stay in her house. They have now accompanied her to Spain to receive badly needed medical attention. 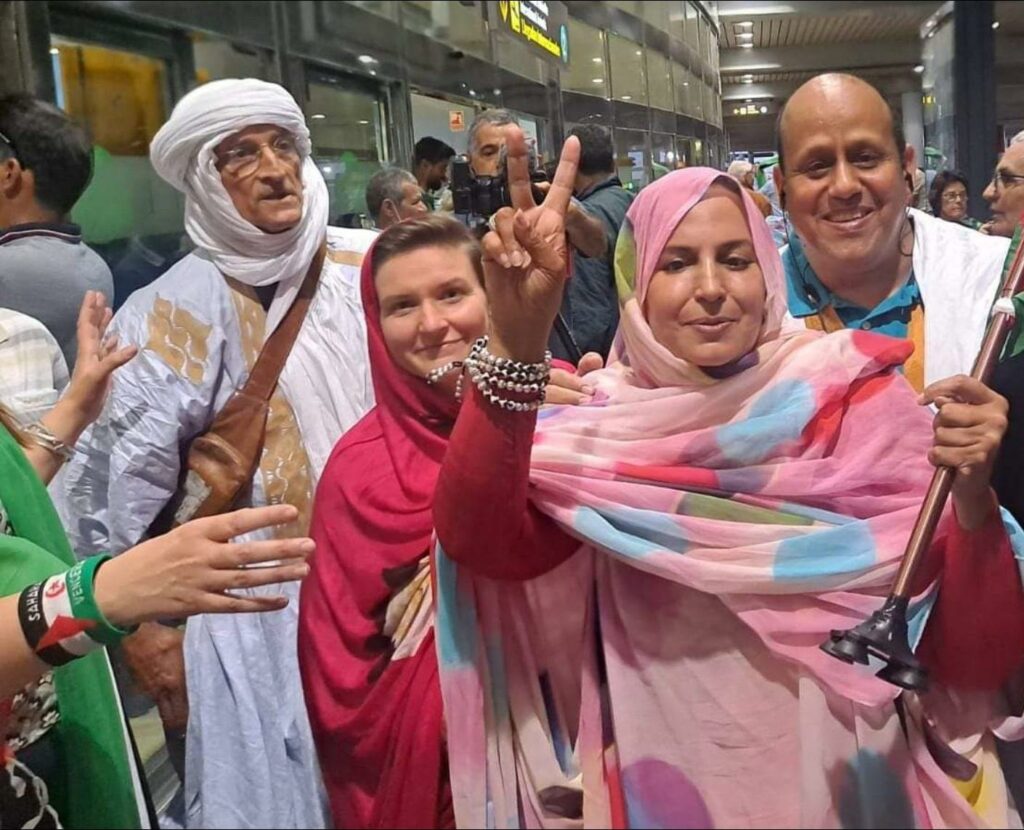 Human rights organizations have recorded widespread detentions, the torture of dissidents, and violent suppression of peaceful protests by Moroccan forces in Western Sahara. In addition to the oppression of peaceful protestors, since November 2020, Moroccan occupation forces have been forcibly confining the Khaya Sisters to their home and the family is facing many forms of abuse, including home invasions, sexual violence and injections of unknown substances. We cannot allow this abuse and violence to continue. We are called to expose these human rights injustices and join together to build peace in Western Sahara. At the invitation of the Khaya family in Boujdour, Western Sahara, US-based volunteers have arrived at their home to protect them from human rights abuses and interrupted the almost 500-day siege of the house imposed by Moroccan occupation forces.

Supported by the Human Rights Action Center (HRAC) and a network of other human rights groups, the international unarmed civilian protection (UCP) volunteers, Ruth McDonough, Adrienne Kinne, and others, are currently guests in the Khaya family home.

Since November 2020, the Khaya Sisters have been forcibly confined to their home and the family has faced many forms of abuse, including home invasions, sexual violence and injections of unknown substances. The Khaya sisters have been raped by Moroccan security forces in front of their 84-year-old mother. Furthermore, their water has been poisoned, furniture and property destroyed, and electricity cut-off.

Referring to her experience, Sultana Khaya shared, “I am not the first Saharawi woman to be raped by the occupiers. I am simply the first woman to speak publicly about it. I have to expose the reality of the occupation. And I need to pave the way for the next generation of Saharawi women.”

Sultana Khaya is a Saharawi human rights defender whose work focuses on promoting the right of self-determination for the Saharawi people and ending violence against Saharawi women, through active participation in nonviolent efforts and demonstrations. She serves as the president of the Saharawi League for the Defense of Human Rights and the Protection of Western Sahara’s Natural Resources, and is a member of the Saharawi Commission against the Moroccan occupation (ISACOM). She is a nominee for the Sakharov Prize and winner of the Esther Garcia Award. As an outspoken activist, she has been targeted by the occupying Moroccan forces while engaged in peaceful protests, enduring abductions, beatings, and having one eye gouged out.

According to Ruth McDonough, “Violence against women must stop everywhere. I am here to support Saharawi women who are demanding their rights.”

Jack Healey, founder of HRAC and former Executive Director of Amnesty International, USA, said, “I insist that the U.S. government stand up for human rights in Western Sahara.”

The HRAC visitors call for an end to the rapes, freedom of movement for the Khaya family and all visitors, and an independent international investigation of these human rights abuses. HRAC supports a more detailed list of demands made by the Khaya sisters which include removal of forces and barricades around their house and neighborhood and the remediation of their poisoned water reservoir.

Grounded in international law, Unarmed Civilian Protection is a nonpartisan strategy that revolves around the use of nonviolent methods by civilians to protect other civilians under threat. Such protection is provided on invitation from local actors and supports local agency and infrastructures for peace.

Morocco invaded the Western Sahara in 1975, and has occupied it since then. The Western Sahara has UN status as the world’s last major non-self-governing territory. In 1991, the United Nations promised to hold a referendum for self-determination for the people of Western Sahara. To this day, the referendum has not transpired.

Support HRAC in their Demands of the Moroccan Forces

Please pick up your phone and speak to someone:

Morocco Citizens and anyone anywhere: